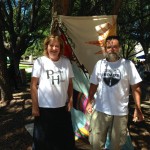 Met a whole lot of great people today at CSU student orientation. It was packed around noon and both Joe & I gave out hundreds of cards. We hope to have student volunteers joining us soon. We met musicians, artists, creative and passionate people who loved what we’re bringing to the east side. Great things are on its way and with the music and art space complete we’ll have another area for bringing people together to better the community.

We followed the day by joining a drumming circle on the river walk under the main st. bridge where many talented drummers gathered and what a sound they made!  The coordination of rhythm & beats was astounding.  Drummers came from CO Springs and Denver to participate.  We surely have a lot of talent locally.  Many have offered to play at Pueblo House and that’s wonderful.  We’re working hard to get the houses completed so we can start more programs for the kids. END_OF_DOCUMENT_TOKEN_TO_BE_REPLACED

Back with renewed vigor after a short family break.

August 24th, 2014 | Posted by Occupy The Roads in Bishops Castle - (Comments Off on Back with renewed vigor after a short family break.)

Today we decided to take up the offer Noemi put forward and go to visit Bishop’s castle which is in the mountains about 40 min. s/w from Pueblo. We decided to leave the overwhelming demands and world sadness behind to go find an adventure, and that we did. With the RV stocked up, we went to meet a long time anarchist who’s father (or grandfather) built the castle over 50 yrs ago. It’s had additions over the years and become quite a tourist attraction, equipped with a very cool gift shop with handmade crafted items. My camera was acting up and wouldn’t take more than 2 frames before freezing. It started acting up Thursday night when we went to the Scott Tipton (CO R-Rep) town hall meeting (straight from the airport and that’s another story of its own). Perhaps I smoked it while in Canada taking too many pics . Well it’s retired itself today. And all of you who know me can imagine how devastated I am right now. No pictures turned out but thankfully I had back ups with my phone camera so I could share this awesome experience. Tomorrow is another day and I will tackle it with vim & vigor or….just paint the heck out of something!  (Janet W) END_OF_DOCUMENT_TOKEN_TO_BE_REPLACED

Sturgis Bike Rally next year anyone?

Oh boy, found out there was a humungous rally in Sturgis this weekend and the RV could have been sitting in the middle of it had we known earlier.  A friend came by while we were sitting at the Chieftain newspaper (protesting the Israel/Palestine conflict and trying to get media attention) to let us know he was heading there and they were expecting over 1/2 million people.   Now that’s worth occupying!    Maybe a plan for next year should be on the agenda,  especially because they’ll be celebrating 75 years.  Now that sounds like an event worth attending.  They all hate what the Government’s doing too, right?  Ok….that’s a start.

That tour would be after our girls tour …”Get the money out”!  Coming to a city/town/tent near you this fall/winter!  Ladies start your engines….is Mexico calling us? (JW)