September 10th, 2012 | Posted by Occupy The Roads in Meetings | Pueblo

Last night City Council meeting in Pueblo was appalling. With standing room only and then some being turned away everyone was eager to hear about 2 important issues:
1) Relating to Employment Benefits for Same Gender Domestic Partners
2) Amending Citizens United on the ballot

Neither of which was passed and both removed “indefinitely”. It was a sad day for all the people who were there expecting that (at least more than one council member) would vote to address these two very important issues. Tempers flared and the council meeting was vacated entirely other than a few people. The meeting was then started up by those who left, on the front lawn. We heard from the community most affected and while the feeling of exasperation was common, it was felt that the voices of the people are not being heard. Once again the select few who are looking out for their best interests get to decide what’s best for everyone else. It was a sad day. We plan to BE AT the next meeting and it will be a day for “voices to be heard” whether or not they want it! 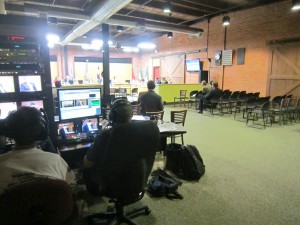 This is the room after everyone walked out! Well all but those three or four people. The mood was dismal and many complaints set to be filed. The voices of Pueblo, or America need to be heard! We will see to it they are…..Expect us….we don’t forgive and we don’t forget!