Tino, Tony and John out on another march supporting the Bridgeport people that were arrested the other night in Chicago. Appears there’s some funny stuff going on there….can we say trumped up charges?

The march today around noon from the park to Rahm Emanuel’s home went really well. Lots of people took over the streets. Tino was streaming and I took pictures…lots and lots of pictures. The police presence was over the top! Big $’s were paid out today! 20 on bikes roaming with another 20 or so in front of his house and then another 20 at least here and there blocking intersections. Those are just the ones we saw in uniform. Protest was peaceful and awesome :-). Pics coming shortly. 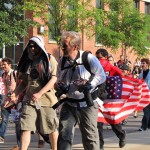