The ‘V’ gets a makeover on Wiki side!

Since the RV was done in NY it had taken quite a beating, weather and mileage, so we decided it was time to get a facelift and since we now own a radio station in Pueblo (KOYC Radio 98.5FM) we thought that would be perfect.    We now have 21 ft of advertising for our station.  The coolest station around we might add!

We launched our low powered radio station in Feb. 2017 and since then have made a huge impact in Pueblo.  A wide variety of music (much local bands and musicians) and talk shows have made us quite unique.  We are working on getting the shows up on our KOYC Radio. com website so everyone will have a chance to hear them.  Until then we talk about pressing issues of Pueblo, the State and Federally.   We also have our J Sq’d Show with Janet & Jimi and then our THC (Theoretical Heretical Conspiracy Show) where we talk about what’s the rumor, untold truths, and how the media fail to mention many things of importance.  We have a voice and we’re using it.  Occupy the Roads….Alive and Well in Pueblo. 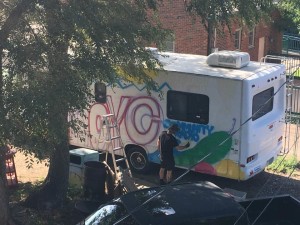 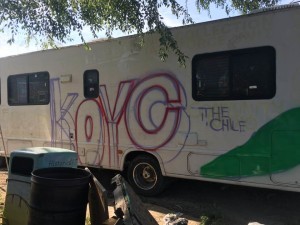 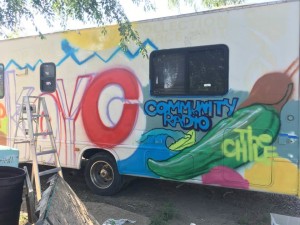 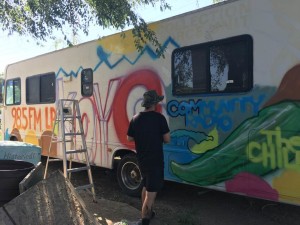 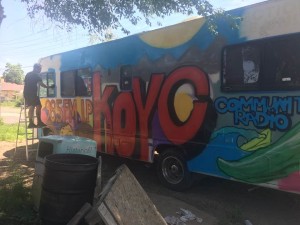 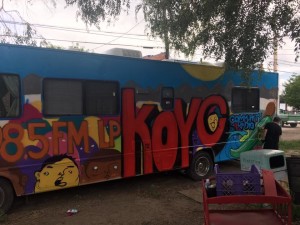 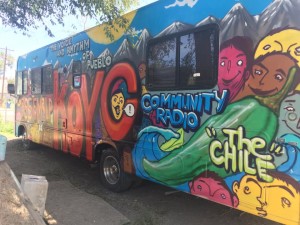 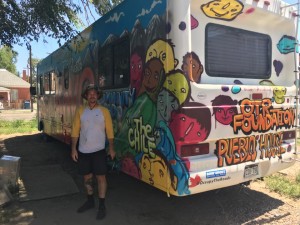 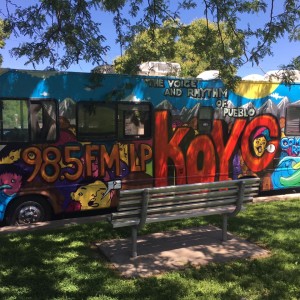 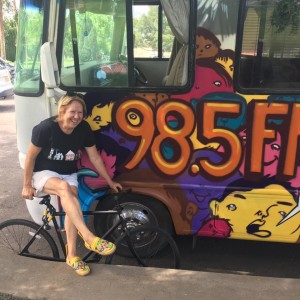 At the MultiCultural Festival with my dazzling shoes! 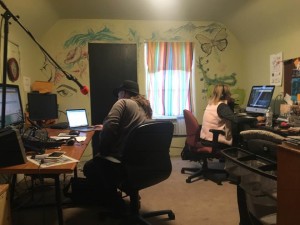 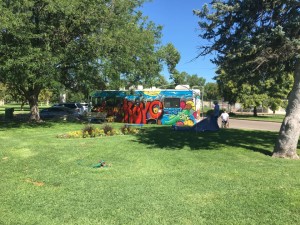 This was an extraordinary turnout for Pueblo.  It was obvious that women, men and youngsters felt strongly about supporting this important cause , indicated by the numbers that showed up, to help spread the love and the message of solidarity for equal rights and equal treatment of everyone on the planet.

It’s always great to get the ‘V’ out on the streets, especially for a cause about equality.  But, alas it appears that sometimes our message can be too big for some even if we’re fighting the same battle.   Perhaps it’s the 31 ft. of “WikiLeaks” or the “Top Secret”,  or “Information Task Force” on side,  that intimidates  those with whom you’ve aligned to fight injustice.   You’d think with all the revolutionaries on the other side of the ‘V’ it would have been a perfect fit for a march about equality.  After all, those faces adorned on the ‘V’  fought for civil rights and the equality of people,  but yet we were sent off and told, “no vehicles allowed inside the coned area.”  So END_OF_DOCUMENT_TOKEN_TO_BE_REPLACED

Someone please reveal to our inquiring minds,  how does one misplace trillions of dollars?   Imagine going to your bank and finding out that they “misplaced”  your money…like it’s gone, oops, sorry.  Would you give them more?   Of course NOT!  But yet we’re still required to send millions more to the government, yes the same one who “lost” trillions and last reported it was 29 trillion that is missing.

Wouldn’t this be a good time to have a plan?    What if  we formed an escrow account  (The People’s Trust) for tax fund deposits from individuals & businesses who agree to participate.  We immediately  stop sending money to the government, and instead have it go into trust until the following happens: END_OF_DOCUMENT_TOKEN_TO_BE_REPLACED

We hope everyone has food to eat, shelter to stay warm and family & friends to keep you company!  2017 was a very good year for us at OTR with the launch of our new radio station KOYC (Own Your Community) 98.5 FM LP in Pueblo.   We have a range of about 8-10 miles, so we’re covering a good portion of Pueblo.  Our programs are all about local; whether musicians, youth, schools and events we want to ensure everyone’s voice is being heard.  That’s why we call ourselves  the VOICE & RHYTM of Pueblo. END_OF_DOCUMENT_TOKEN_TO_BE_REPLACED

We spent most of the day with Crystal Zevon, after meeting up at the Railroad Place in Santa Fe. There was so much to see and we sure were grateful to the church for letting us park there because parking was very limited. After Shar, Jimi and I met Crystal we walked to the plaza where we found the most amazing art and food. After veggie pizza and visiting the old Basilica church we parted ways and ventured down END_OF_DOCUMENT_TOKEN_TO_BE_REPLACED

The V is back on the Roads!

From Pueblo to Taos and then on to Santa Fe.  The scenery is spectacular.  It’s been 5 years since I came through here originally.  Hope to meet up with some occupiers if they’re still around.

END_OF_DOCUMENT_TOKEN_TO_BE_REPLACED

The weather held out as we put a new roof on the ‘V’    She was in pretty bad shape with all the wear and tear throughout the years.  Not to mention all those trees scraped while trying to park in cities around the country.

The roofing supplies went on sale at almost 1/2 price so the timing was perfect.  Now we’re good for another 10 years with two layers of rubber compound to stop any leaks. END_OF_DOCUMENT_TOKEN_TO_BE_REPLACED

People attack you for standing up to the status quo and for equality. It’s hard to be different and be your own person with your own thoughts, in a world that wants a nation of clones. Ah, but now in the news… all this talk about football players kneeling during the anthem! In this country we have “rights” protected by the law? Freedom of Speech is one? If those who think everyone should just follow and not do, or say anything to disrupt the apple cart then perhaps they should go live in a country where you’ll be told what to think and say. As long as you follow the ‘rules’ no problem, right? END_OF_DOCUMENT_TOKEN_TO_BE_REPLACED

BC & Oregon were occupied!

The ‘V’ spent a few days on the sunshine coast traveling all the way to Squamish, BC Canada where it surely was a big hit with all our revolutionaries on the side of it.

The day before leaving I noticed a lady riding her bike in front of the house. She had her dog on a leash and as I came out of the house to put some stuff in the RV, I saw that she had stopped and was now taking pictures of the RV, so I put the stuff down in the inside, closed the door and went to say hi. She said, “that’s quite a vehicle you have there”, to which I replied yes indeed. Then she stated how each person whose picture adorned the ‘V’ were so inspirational and made the world a different and better place. She remarked about people and serious struggles that were prevalent today. She said the world had changed and mentioned it was tough to deal with all the issues we faced without getting depressed (I remind myself this was Canada), then she mentioned that she cries almost every night about the things that are happening around us.   END_OF_DOCUMENT_TOKEN_TO_BE_REPLACED

Back occupying some roads

The ‘V’ is back occupying a few roads as we make our way west across the US and then up to Canada where it will be parked for a week or so while we enjoy some ocean time.

The trip through Colorado, Utah, Idaho, Oregon, Washington and then across the border into B.C. Canada was beautiful.

We met a couple interesting men while getting tires checked in Utah and surprisingly enough found some of the same issues there as were plaguing Pueblo.  Crime and drugs do not have defined borders.  The interview will be posted shortly. END_OF_DOCUMENT_TOKEN_TO_BE_REPLACED